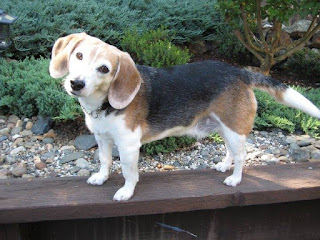 As of last week, I graduated from the Professional Dog Trainer’s Course through the Karen Pryor Academy. The process of learning new skills was terrific for me, but it was even better for my 15 year old Beagle Pocket.

Pocket had been an animal actor many years back and was an absolute ham. The minute he entered the set, he lit up immediately. Unfortunately, seven years later his career was cut short due to a compressed cervical disc. After surgery, he was officially retired. We still would go for walks regularly, light hikes and road trips - but his training took a backseat. When I applied for KPA, I chose him as my partner because I know how much he enjoys the spot light. What I didn’t realize was how the training would change my perceptions about my relationship with my dog.

Lesson One: OMG he doesn’t know how to think for himself!
In his former career, we used a lot of manipulation and luring. This became blatantly apparent when I started clicker training. The beauty of the clicker is your dog is an active participant in the learning process. Many of the behaviors that are put on cue are based on natural behaviors that the dog offers. Here lies the problem: If you’ve been told exactly what to do all of your life, and then someone says “hey, show me what you can do!” it’s downright weird. Pocket found this process frustrating. He’d get a click, eat, then stare at me as if he was asking for his next line in a script. I’d wait for something small that I could click, to keep up the rate of reinforcement, but he’d quickly become flustered. It took a while for him to break free and start offering behaviors on his own. The day it happened, he seemed like he’d been freed from a straightjacket.

Lesson Two: What was bad is now good.
Pocket historically hated fetching. Originally, we placed the object in his mouth, he was told to “hold” and then it was removed for a treat. It sucked. He looked like he was fetching a dirty toad. With clicker training, this all changed! I put a highlighter pen near him and waited - he stepped near it - I clicked! He looked at it - I clicked! This continued until he was picking it up with amazing gusto! I laughed so hard at his discovery of the new “game” that I wanted to cry. It was the best day ever - see for yourself:

Lesson Three: You talk with your hands
I am a horrible double cuing machine! Cuing is an established trigger which tells your dog what behavior to perform. For example: If you ask your dog to sit you expect his furry little heiny to hit the pavement. The thing I didn’t realize is that I would ask Pocket to “sit” with a verbal cue while giving a hand gesture at the same time - this is double cuing. For all these years I thought Pocket knew the word “Sit”, but with my hands sequestered behind my back I received a blank look. When I let my hands do the talking by themselves - BAM, butt on pavement. Lesson learned.

Lesson Four: There's no "I" in Team
My last assessment for the class was to show off a fluent chain of ten behaviors seamlessly blended together. Each behavior doesn’t get a click and treat. Instead, your cuing reinforces the previous behavior. It’s like a row of dominos that are stacked on end, ready to tip each other over. The cue acts as the flick of momentum to get each one domino to tip into the next. Timing is essential, or the next domino won’t fall. If properly done, it creates a chain of behaviors that morph from one to the next naturally, cuing one after the other until the click and treat at the end.

On the day of the assessment Pocket was eating grass and, over all, not feeling well. Though he obviously felt sick, he did his best. It wasn’t beautiful, but he was a trooper. I would be lying if I said I didn’t have a flicker of panic to push him harder…but I didn’t because clicker training is about the bond you have with your partner. Though this was my exam, it was just a training session to him, and one he didn’t feel up to participating in. I stopped early, unsure whether our efforts were enough to gain a passing score. I never felt bad about my decision though; Pocket spent years doing what he was told, and now he finally had the power make his own decisions - to do or not do. It was my job to listen, even if my grade was on the line. To disregard his needs would be an unimaginable breech of trust.


I can’t say how happy I am that I went on this adventure with Pocket. He’s recovered from his tummy trouble, I passed my course, and managed to keep my promise to be a better listener. As you can see—I, too, can learn new tricks.
Posted by The Behavior Service at 9:49 PM